STAY CONNECTED WITH US

Why Did AC Refrigerant Change? 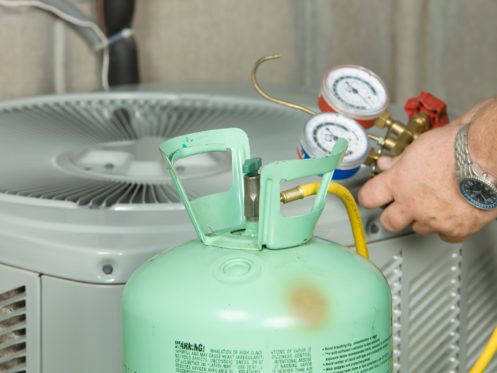 It was several years ago that R22 refrigerant, also known as Freon, was replaced by R410A refrigerant, or Puron, in air conditioning systems. As of January 1, 2020, R22 refrigerant can no longer be produced or imported to the United States. There are a few reasons for this change.

Why R22 Refrigerant Was Phased Out

The Environmental Protection Agency (EPA) prohibited new air conditioners from using R22 in 2010. R22 was phased out mainly because of its very negative impact on the ozone layer and the environment in general.

However, air conditioning units that use R22 could continue doing so. When its production and import were banned in 2020, the cost of existing R22 rose dramatically. It is now very expensive to have refrigerant replaced in your cooling system if it uses R22.

Modern air conditioners use R410A. Almost all AC units produced since 2010 use this refrigerant. While R22 contains chlorine that harms the ozone layer and environment, R410A is chlorine-free and so is environmentally friendly. It isn’t toxic or flammable, either. It’s also reliable.

What Are the Benefits of This Change?

There are more benefits to this change than simply reducing ozone depletion. The new refrigerant costs a lot less than R22, especially since January 2020. R410A is also more efficient, as it absorbs and releases heat better than R22. Since it releases heat better, it helps the compressor of your cooling system last longer.

You can’t use R410A in an air conditioning system that was designed for R22. Your only choice is to replace your old unit with a modern one.

Titan Heating & Air is proud to serve Georgetown and the surrounding communities. We repair, replace, and tune-up air conditioners and heaters. If you need a cooling or heating service, call us today.